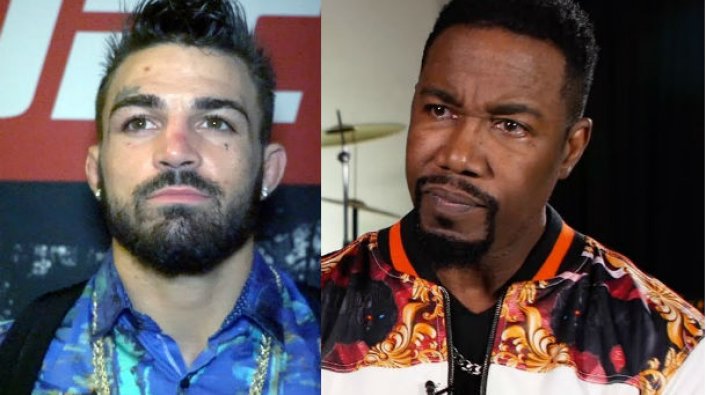 UFC fighter Mike Perry hopped on social media in order to offer his take about on Michael Jai White’s recent VladTV interview where Jai White discussed working with the late Kimbo Slice on Blood and Bone. Specifically, Jai White talks about teaching Kimbo how to properly conduct an on-screen fight and being broken up about his death.

Mikey Perry addressed this interview, tweeting his thoughts and basically calling out Jai White to fight on PPV or in the “backyard” for free,

“An actor recently was saying how he was trying to teach kimbo something too difficult for kimbo to grasp. I think you actors better stay in the movies. 1 knee make your nose look like special effects…I just feel like #KimboSlice would beat the fu*k outta @MichaelJaiWhite and his tone in the video really bothered me. He should fight me backyard bare knuckle because I would like to learn this ‘prison movie technique’ he was talking about #PPV #Or #For #Free.”

“I like Mike Perry, that’s why I follow him! Maybe he ‘FEELS’ I meant to diss Kimbo but he’s wrong. Slice was my friend RIP, and many extracted the positive, teachable moment I intended….Maybe if MP learned my ‘Prison Movie Technique’ he wouldn’t be ranked #20? I got no time for playground callouts Brother but holla when you come thru and maybe I’ll have time to give you a personal demo. Just DM me Bro. It really ain’t that hard!”

“Read @PlatinumPerry response and saw his past threats to @BrendanSchaub and others. Now I get it! I’m sorry I ever responded & wish him nothing but the best! This ends now. Honestly, be well MP!”

“Blood and bone more like b*tch ass n***a @MichaelJaiWhite,” ….this led to heavy criticisms from UFC fans engaging in the back and forth tweeting among the two fighters. Perry then responded by tweeting, “You have to make a big deal out of this. A white man said that to you because you straight up being one. Y’all can’t act like you don’t hear me. It was bull sh*t he was trying to slander a real gangsta so people would think he more than an actor. For #FLA we say #FOH.”

Basically, Perry ended by representing for the State of Florida and claiming to defend the late Kimbo Slice (who was from Florida). Perry fights out of Orlando. Catch the tweets below. 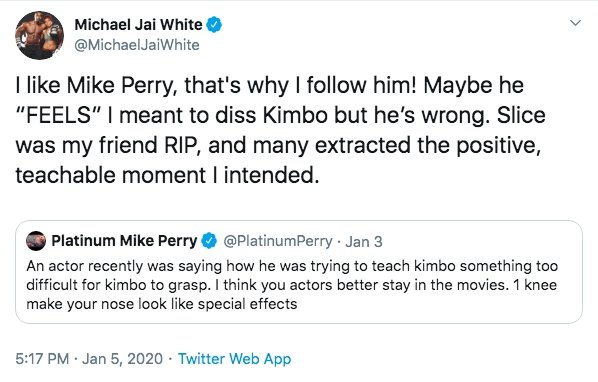 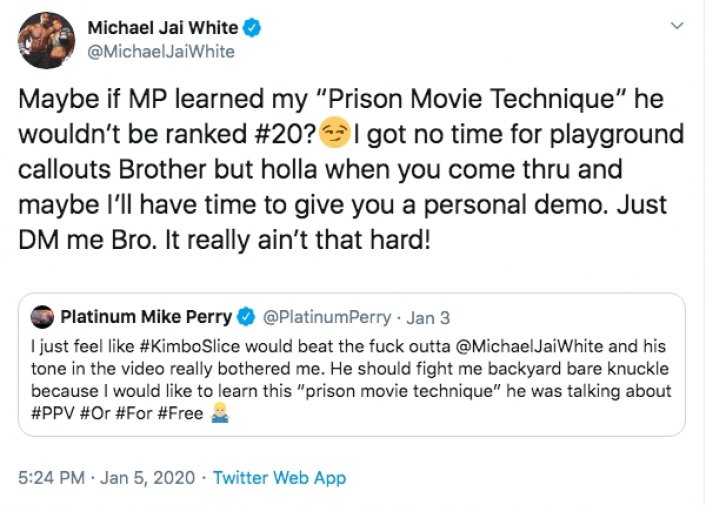 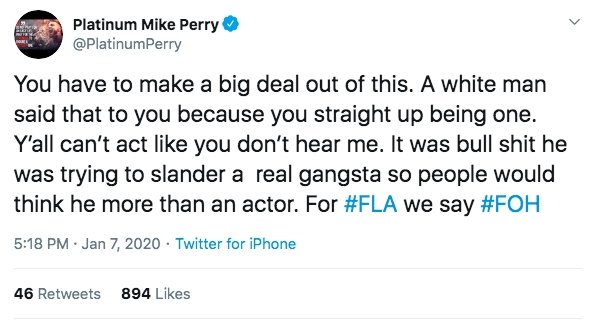