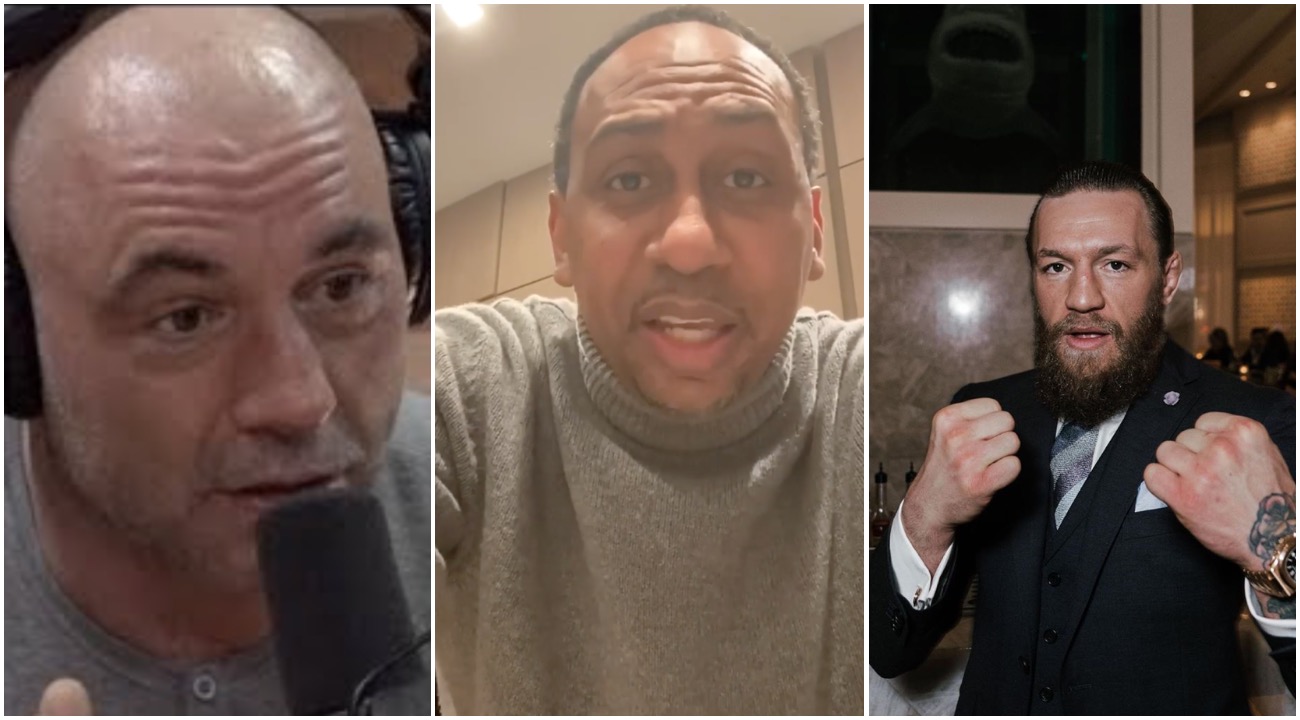 Joe Rogan wasn’t impressed with Stephen A. Smith’s fight analysis following the Conor McGregor/ Donald “Cowboy” Cerrone fight at UFC 246 last week. Following the fight, Stephen A didn’t seem impressed when he stated during his post-fight remarks: “Here’s the deal: 15 seconds in, ‘Cowboy’ Cerrone was done…He got hit with those shoulders in the clinch, and he was done. It look like he gave up. It was just an atrocious performance on his part.”

Rogan took issue with the ESPN sports analyst’s blunt, and what Rogan perceived as unfairly harsh, critique of the fight. Rogan himself used to fight MMA. During a recent airing of The Joe Rogan Experience with guest retired UFC fighter Josh Thomson Rogan states,

“I don’t know him as a human being. I’ve only met him a couple of times,…He’s a nice guy, nice guy to me. We had a nice conversation. On air, we had a little weirdness because he was just saying ‘we didn’t learn anything about Conor!’ I’m like ‘the f*ck you didn’t!’ He just destroyed Cowboy in 40 seconds … Yeah, you learned something, you just don’t know what you saw.”

“There’s a lot of currency in being a Stephen A. Smith, you know? He’s really entertaining. The sh*t-talking that he does…. he’s a guy that’s fun to watch. He talks a lot of shit and he gets real loud and everybody disagrees with him. Look, it’s made him a fantastic career. That’s why, and he carries that over to MMA. I think it’s a bad idea.”

It didn’t take long for Stephen A to respond to Rogan’s criticisms. Then, Conor McGregor hopped into the conversation and instructed Stephen A to apologize for his post-fight analysis (notice both Stephen A Smith and Joe Rogan are tagged in Conor’s post).

The call you discuss here is A+. I didn’t show enough. I’m not paid by the hour though. Joe’s comments however, come from you saying the opposition fighter quit. Broken nose/orbital bone say different. Fighting is vicious. Those who make the walk deserve full respect!
Apologise.

Catch Stephen A’s response to Joe Rogan below. Below that we’ve included the The Joe Rogan Experience episode containing the above comments.

You’re wrong on this one, @joerogan. pic.twitter.com/eU140zXlcW