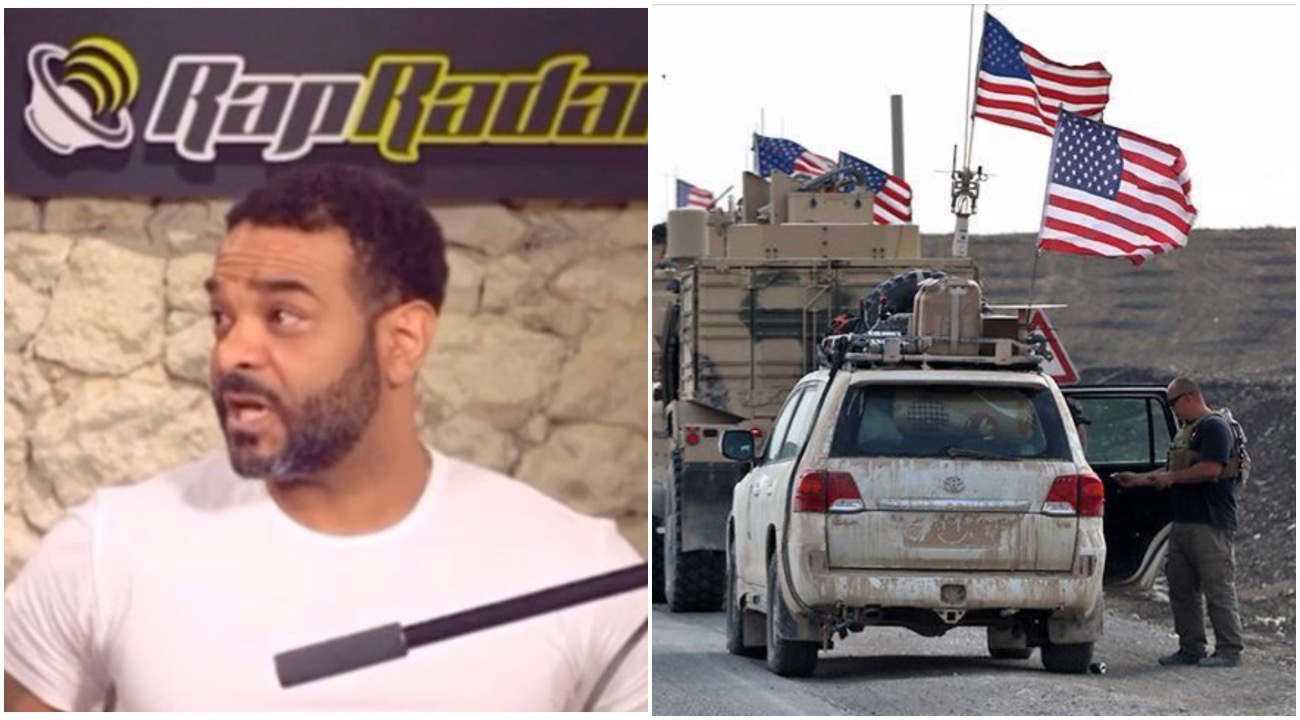 Jim Jones recently stated that “being a rapper is more dangerous than going to war in Iraq.” Anyone who missed the Dipset members statements can watch them here. On the surface this may seem like a bizarre statement however some context is needed.

The following infographic highlights where U.S. military bases (along with certain American ally military bases) are situated within Iraq. 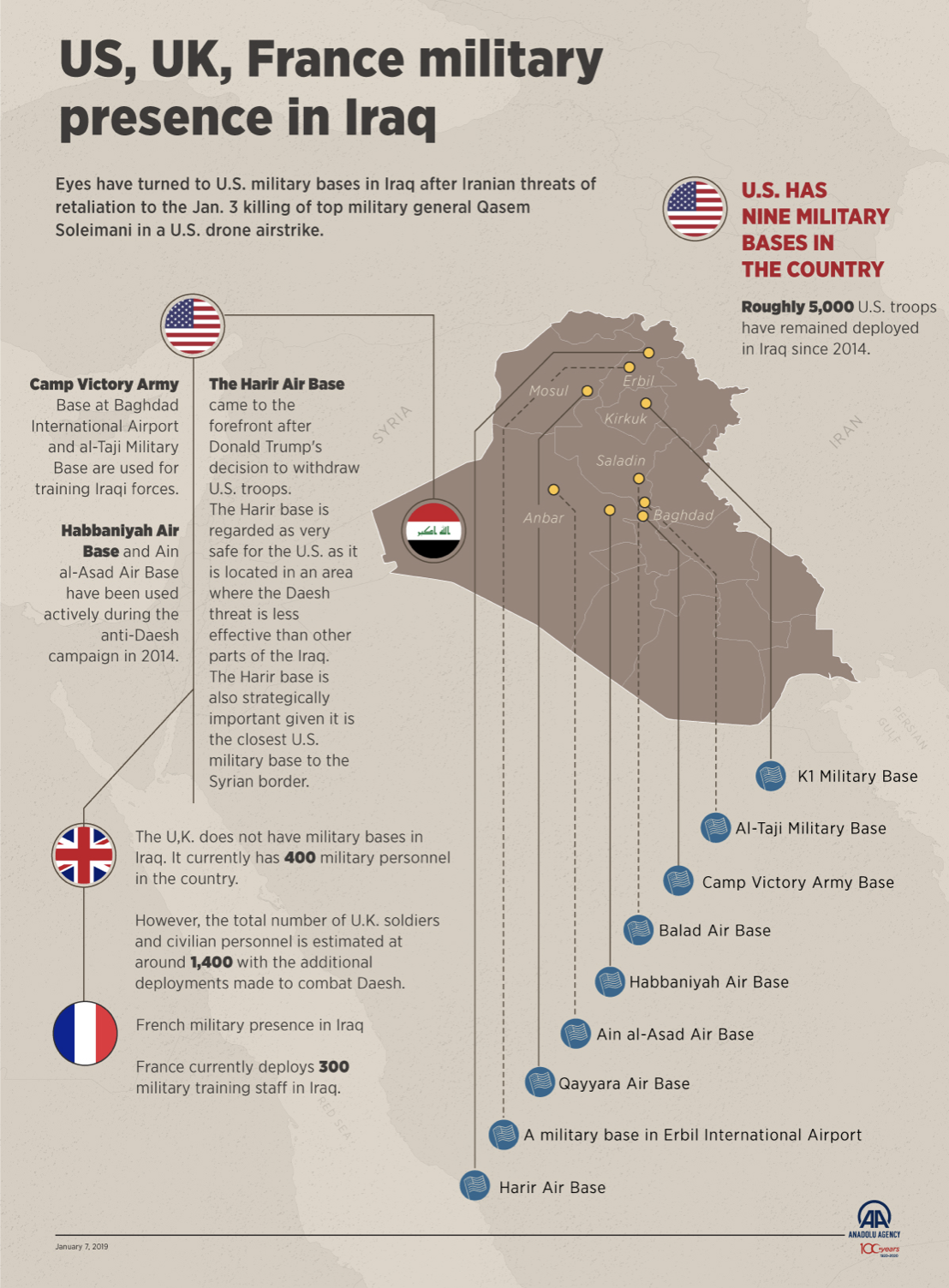 The Watson Institute for International & Public Affairs at Brown University states that in a time range of 20 years ranging from October 2001 – October 2019 a total of 7,014 U.S. Military personnel have died in wars ranging from Iraq (4,572) & Afghanistan (2,298) and also including the war on ISIS (7) and 136 classified as “Others.”

The following is a chart courtesy of Statista.com highlighting U.S Military deaths in Iraq from the beginning of the war through 2019. 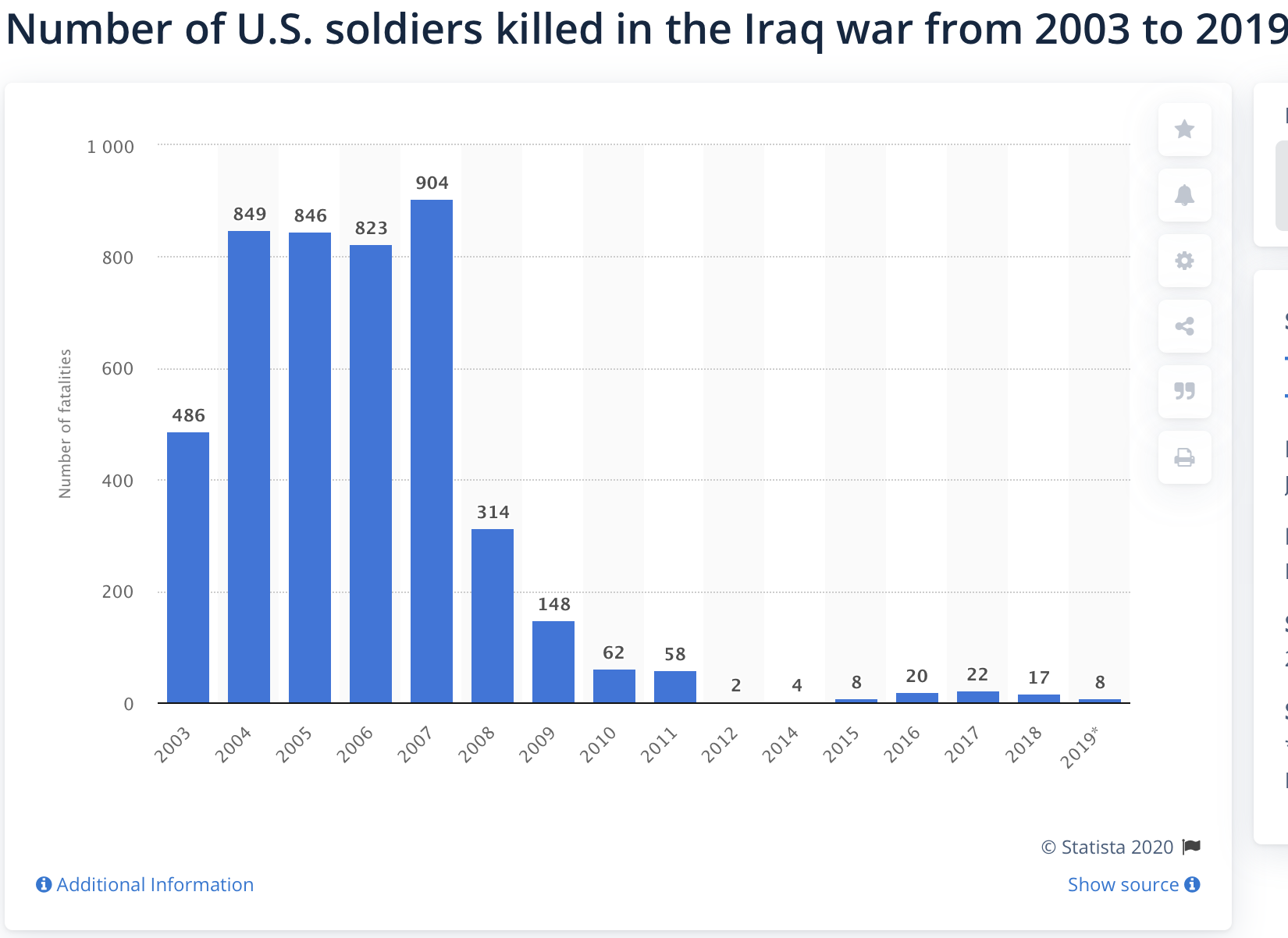 Remember, Jim Jones stated that “being a rapper is more dangerous than going to war in Iraq.” Keep in mind, the U.S. Military is by and far the most technologically advanced military in the world. This mitigates much risk faced by U.S. soldiers when fighting in war zones. Also, the U.S. Military is now heavily employing mercenaries to fight its wars in the Middle East and Afghanistan. Also, the U.S Military is using an enormous amount of money to protect and facilitate the well-being of U.S. Military personnel in Iraq. Notice the stats below courtesy of Brown University. Between 2001-2016 the DOD and State Department/USAID alone spent $805 BILLION for U.S Military operations in Iraq. This doesn’t included money spent to facilitate and protect covert operations of the CIA, FBI, etc.

In his debate with the military veteran, Jim Jones states, “here are the facts every ni**a I grew up wit is either dead or in jail so you wanna compare death tolls it won’t add….”

One of the dangers of being a rapper is that you’re harassed by the Hip-Hop police regularly. In 2019 alone, nearly 1,100 in the United States were killed due to police brutality according to mappingviolence.org. In reality, many rappers are from America’s ghettos. Growing up in the ghetto, becoming a rapper and not having a felony on your record is not a guarantee. If you do have a felony on your record then you can’t carry an armed weapon. 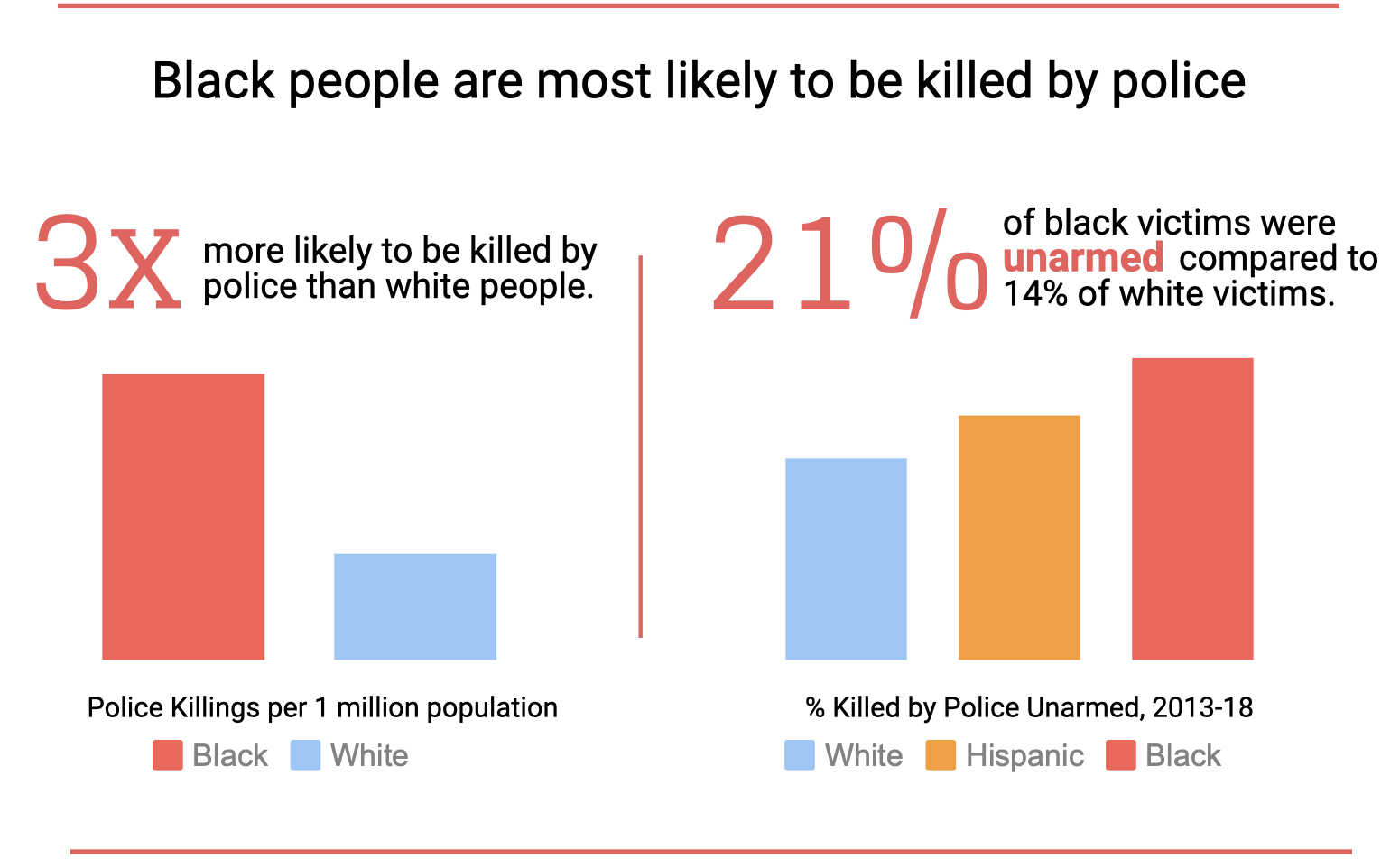 Also, if you’re a rapper then you have to learn management skills as you go. If you’re a military member then you’re joining the most organized institution in the world- the U.S. Military. As a military member you don’t concern yourself with trivial matters like being ripped by your manager or bodyguard.

The argument for going to war in Iraq being less dangerous than a rapper would not apply during the battles of, for example, Fallujah. Generally speaking, most military personnel are in non-combat situations even if they’re combat ready. As a rapper, you don’t know who’s going to attempt to take your life. It may very well be someone you grew up with just ask the late Nipsey Hussle. Another example is the case of XXXTentacion who was killed by people he knew from his youthful days. Also, Juice WRLD was forced to consume certain drugs which triggered a seizure because he didn’t want those drugs to be discovered by police in Chicago’s airport. We’re not arguing that JUICE WRLD should be allowed to use drugs. However, being a high-profile rapper KEEPS one on the radar of the Hip-Hop police and possibly the FBI also. It’s especially important to highlight that many aspiring regional rappers are killed by violence regularly. Fort Worth rapper, Channel 5 Jdub, who most people have never heard of, was shot in the head just this week (see here). Jim Jones is right. Being a rapper is more dangerous than than going to war in Iraq.

Catch Jim Jones debate with the military vet below. 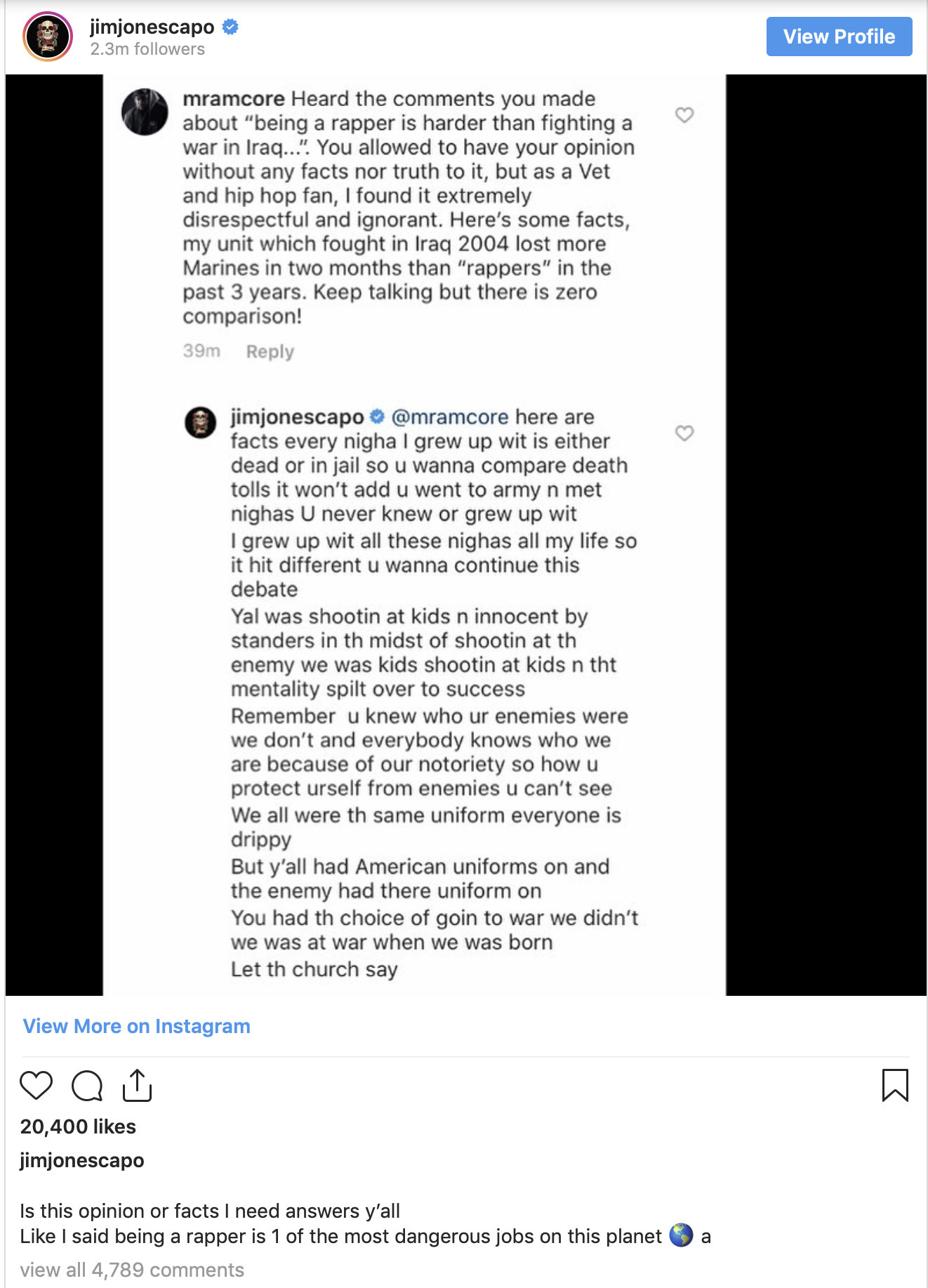