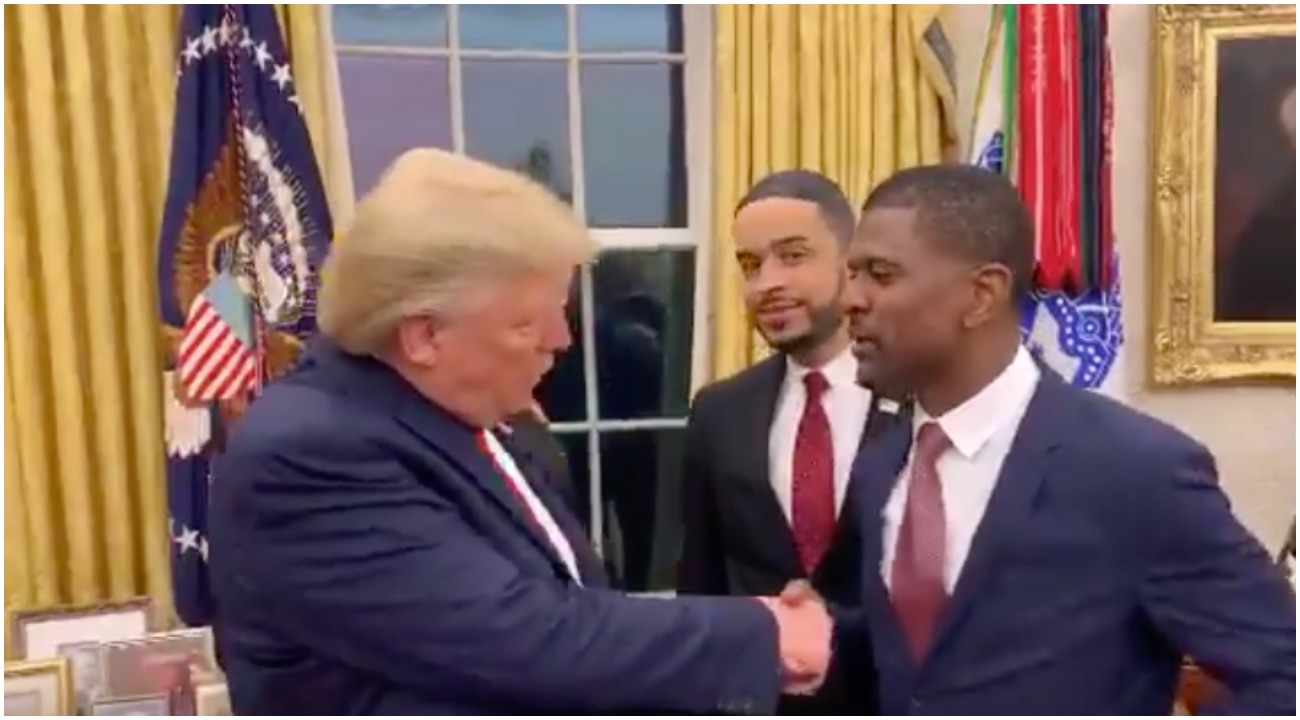 President Trump recently held a meeting that found him communicating with some of Black supporters, and during the dialogue, former NFL player Jack Brewer made a statement that many are questioning.

The conversation at the White House included Martin Luther King’s niece Alveda King, Diamond and Silk, and others. Before everyone got up to take a group photo, Brewer stated,

“I’ve been a Democrat all my life, but I’m not a Democrat now, You’ve changed me. You touched me. And you made my work go to another level. You inspire me. And every time I go into those prisons and I ask my guys how many of them had their sentences reduced and they raise their hands, I know I’m doing God’s work, and I thank you for that. I’ve got to say this because it’s Black History Month. Man, you’re the first Black president.”

Brewer, who spent five seasons in the NFL making stints with the Minnesota Vikings (2002-03), New York Giants (2004), Philadelphia Eagles (2005) and Arizona Cardinals (2006), continued to defend his statement by posting several tweets. See below.

What an amazing honor to attend this!! https://t.co/7yJ4ZGw6yg

"I will not rest, I will not stop, I will never give up until we've delivered equal and abundant opportunity to every neighborhood all across our land." pic.twitter.com/Sfw7kSRKqh

In the following tweet Brewer appears to throw a jab at former President Barack Obama while suggesting that Obama had his prioritize wrong while serving as President.

The black men I know would let other black men out of prison before they started messing with the biblical definition of marriage.. They would have made sure that our HBCU’s were good.. They def would have stood up against all these black babies being aborted. that’s BLACK to me https://t.co/T7GYdL06IW

Love you brother, but losing your mind is not acknowledging when someone is passing policies for your own people. It’s Hypocrisy. Name 5 policies that another President passed to help blacks in America? I can tell you who helped lock us up! Lose the emotion and talk facts.. https://t.co/6FOHR1QSbk

Folks called Clinton a Black President for 25 years, all while him and Biden were locking millions of black men up.. I’m riding with the guy who’s setting black men and women free. We waited for a long time for a President to stand up for us!! https://t.co/SDYPw1Kj7Z