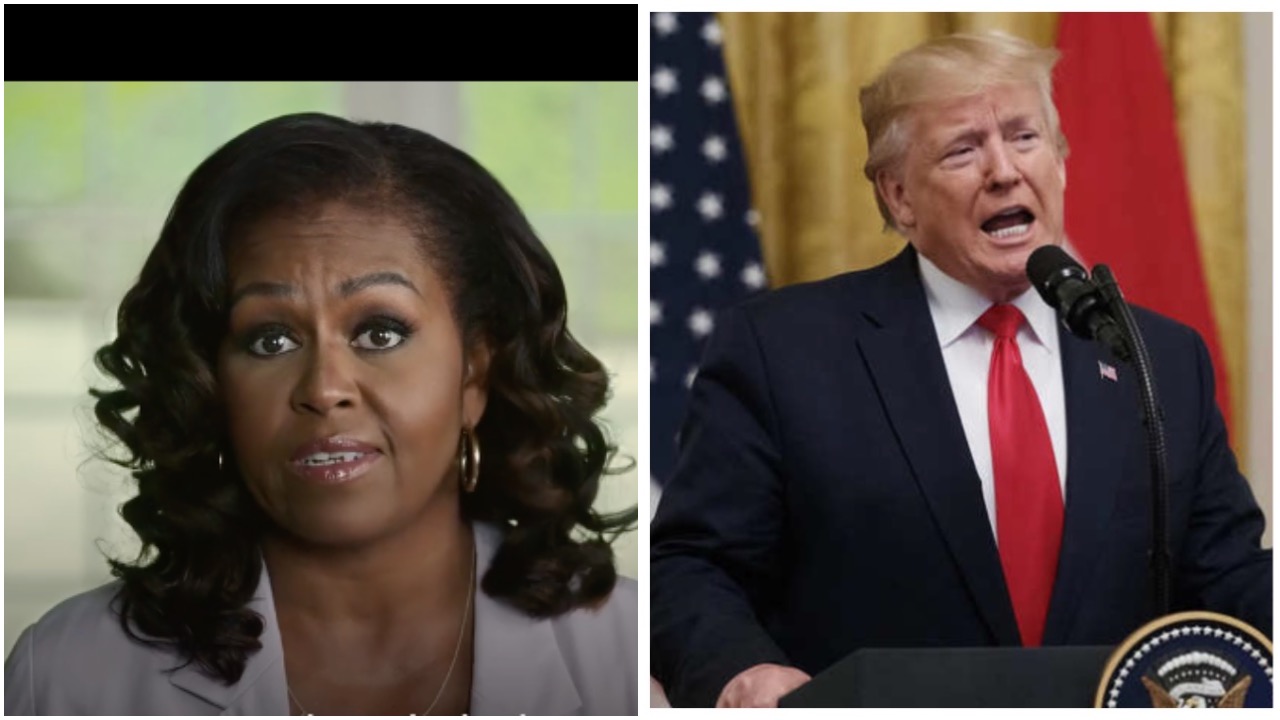 Former U.S. Presdient Barack Obama has been very active campaigning both before and after 11/3/2020 on behalf of his former Vice President Joe Biden. Now, former First Lady Michelle Obama is also publicly seeking to step up pressure against incumbent U.S. President Donald Trump. In a post to IG, the former First Lady penned a somewhat lengthy statement, noting,

“This week, I’ve been reflecting a lot on where I was four years ago. Hilary Clinton had just been dealt a tough loss by a far closer margin than the one we’ve seen this year. I was hurt and disappointed—but the votes had been counted and Donald Trump had won. The American people had spoken. And one of the great responsibilities of the presidency is to listen when they do. So my husband and I instructed our staffs to do what George and Laura Bush had done for us: run a respectful, seamless transition of power—one of the hallmarks of American democracy. We invited the folks from the president-elect’s team into our offices and prepared detailed memos for them, offering what we’d learned over the past eight years.

I have to be honest and say that none of this was easy for me. Donald Trump had spread racist lies about my husband that had put my family in danger. That wasn’t something I was ready to forgive. But I knew that, for the sake of our country, I had to find the strength and maturity to put my anger aside. So I welcomed Melania Trump into the White House and talked with her about my experience, answering every question she had—from the heightened scrutiny that comes with being First Lady to what it’s like to raise kids in the White House.

I knew in my heart it was the right thing to do—because our democracy is so much bigger than anybody’s ego. Our love of country requires us to respect the results of an election even when we don’t like them or wish it had gone differently—the presidency doesn’t belong to any one individual or any one party. To pretend that it does, to play along with these groundless conspiracy theories—whether for personal or political gain—is to put our country’s health and security in danger. This isn’t a game. So I want to urge all Americans, especially our nation’s leaders, regardless of party, to honor the electoral process and do your part to encourage a smooth transition of power, just as sitting presidents have done throughout our history.”

However, the Trump administration has been adamant that fraud has taken place in the election. During a debate between Trump and Biden this past September, Biden agreed when asked, “Will you urge your supporters to stay calm while the vote is counted? And will you pledge not to declare victory until the election is independently certified?”

The reality is that the 2020 Presidential election has yet to be officially certified. Up until this point, the only people “projecting” Biden to be winner of the election are major media outlets including the Associated Press. Hence, it appears more likely that the 2020 race for U.S. President may end up in the U.S. Supreme Court.

Today (11/16), the President continued to plead his case.

The Radical Left Democrats, working with their partner, the Fake News Media, are trying to STEAL this Election. We won’t let them!

The Fake recount going on in Georgia means nothing because they are not allowing signatures to be looked at and verified. Break the unconstitutional Consent Decree!

I won the Election!

However, clicking on the words “Official sources called this elections differently” redirects the user to the following information seen in the photo below. Notice that the “Official sources” in question actually refer to major media outlets.

“Democratic nominee Joe Biden has defeated President Trump in the 2020 presidential election as he surpassed the 270 electoral college votes required to win the race, according to projections by The Associated Press, NBC News and other news outlets.” 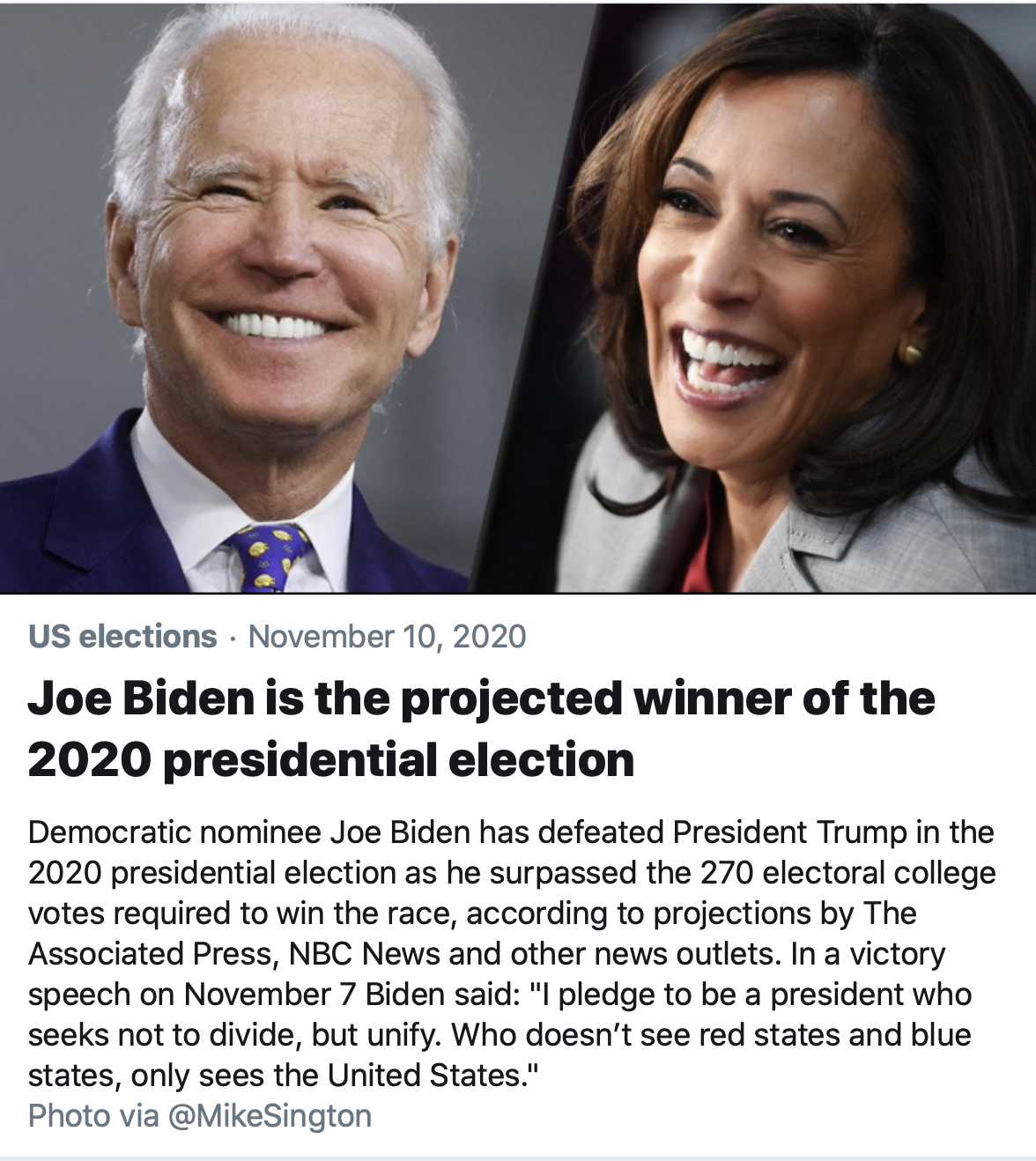 The fact of the matter is that media companies have never had authority to certify elections. They can only project winners. According to the U.S. Census Bureau, there are “153.1 million registered voters eligible to vote in the 2018 mid-term elections.” One has to assume that number is roughly the same for the 2020 elections. Using the 153.1 million registered voters figure we can approximate that roughly half of the U.S. population voted for Trump. This increases the likelihood of showdown in the courts whereas an independent verification process could have probably been done much faster. This will ultimately hurt the average American citizen and economy, both of which are waiting on the latest economic stimulus package.