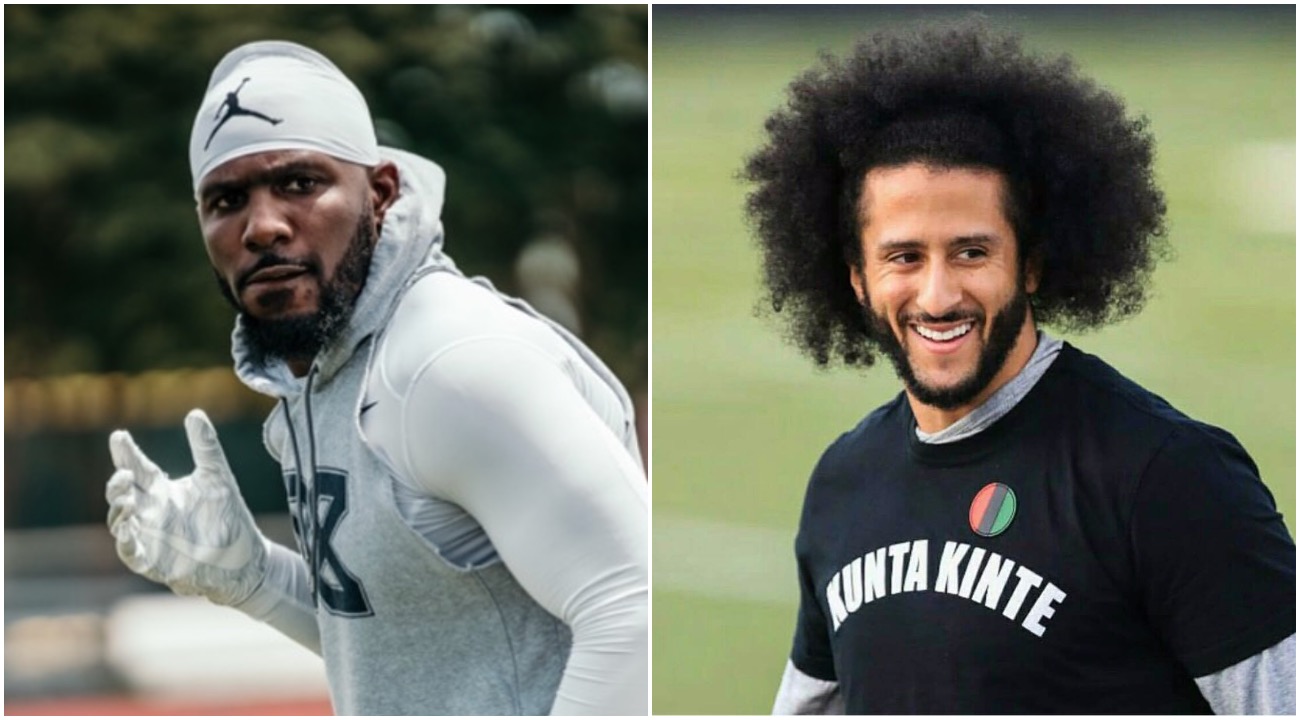 The definition of getting put on BLAST is when you say something about someone or something in front of a big enough and/or loud enough audience capable of communicating that message forward. That would apply in this case where Dez Bryant communicated a controversial message about Colin Kaepernick to his 3.51 million Twitter “followers.” For the sake of full disclosure, before getting to what Bryant stated, allow us to notify the reader that Bryant is A) a free-agent who has not played in the NFL since the end of the 2017 season with the Dallas Cowboys. In 2018, he did not play due to an injury even though he was signed to the New Orleans Saints. B) He’s signed to Roc Nation Sports.

“@Kaepernick7 … I’m not against you I’m with you.. I just want to see the change as well” 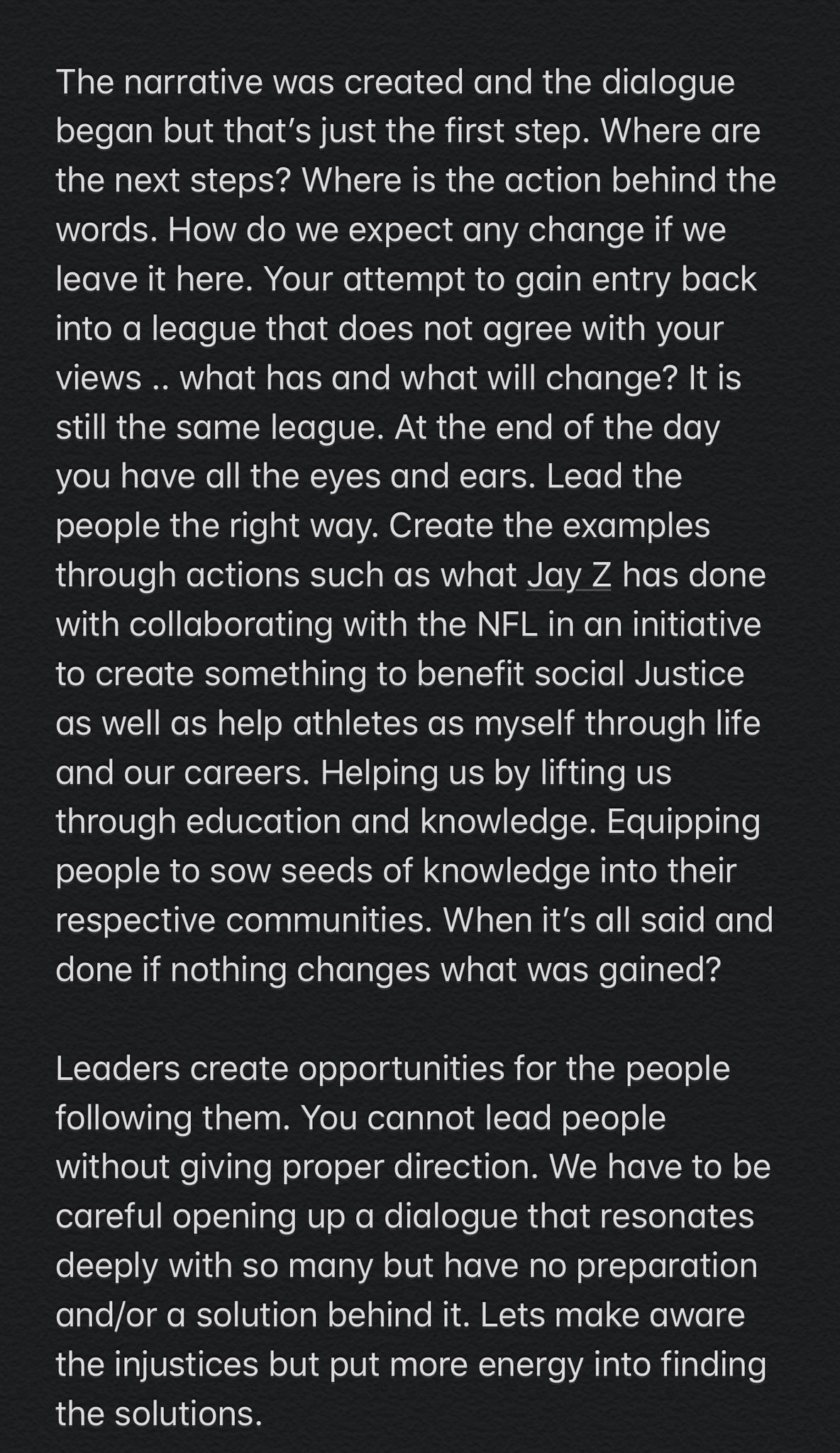 @Kaepernick7 … I’m not against you I’m with you.. I just want to see the change as well pic.twitter.com/6cGW6If0wE

It didn’t take long for someone to call out Bryant for his affiliation with Roc Nation.

You show me something…. https://t.co/fbc91WGzbU

Then, another Twitter user responded to Bryant’s initial Tweet suggesting Kaepernick is showing ongoing leadership through his Know Your Rights Camp organization, which currently has 8 chapters in operation in various cities.

Kap has an entire @yourrightscamp organization. So you’re uniformed about his work huh?? He has been doing work on the ground since day 1. He doesn’t need the NFL to do the groundwork. Y’all are delusional as hell.

To which Bryant responds but again seemingly putting Kaepernick on blast by suggesting Kap wasn’t interested in protesting police brutality until after being benched as a starter. However, that’s not true. Notice the dates on these old tweets alluding to Kaepernick’s protesting.

"I don't commend him for sitting and not honoring this country and our flag." — @TikiBarber on @Kaepernick7 pic.twitter.com/8JeU9WKQZf

Megan Rapinoe knelt during the national anthem tonight in Chicago. Says it was intentional, "a nod to Kaepernick."

Colin Kaepernick wasn’t “benched” until a game versus the Chicago Bears on 12/4/2016 during heavy snow conditions.

Colin Kaepernick's day ends with 4 pass yards and 5 sacks. First QB in NFL history with 5 sacks and fewer than 5 yards in a game.

However, that does not mean Kaepernick was playing so bad before that game in Chicago that he was not optimistic about his football future. He intended on opting out of contract at the time in order to renegotiate better terms.

Check out the following article by Fox Sports, dated more than three months after Kaepernick started kneeling on 12/9/2016. It states,

“It took Colin Kaepernick six weeks to crack the starting lineup for the San Francisco 49ers, but now that he has, the offense has looked significantly better. Since the team’s bye in Week 8, he’s averaged 334 total yards per game with eight touchdown passes and just two interceptions in four starts. He’s looked similar to the player he was during the 49ers’ Super Bowl run, and it has him looking like a starter in 2017.”

Then, during the Twitter conversation, NFL Hall Of Famer Deion Sanders came to the defense of Dez Bryant.

Mr @DezBryant has done quite a few things for the city and he’s planning something HUGE Right now. Y’all just stay tuned and watch. Don’t attack him without knowing what he does for people. Genuine people just have a hard time showing their good deeds on camera

Then, another Twitter user brings out the elephant in the room suggesting Bryant is tiring to get signed in the NFL.

Let's see if this gets you a job in the @nfl.. you're a cornball for this and everyone will remember what side you were on #StillWithKap keep tap dancing though

Boss man… I promise I’ve been set myself for greater heights this game was just a part of my resume… im not desperate for it..because of my own experiences..I’m on Dez side… I’m in the space of controlling what I can control and sharing my experiences to youth for good https://t.co/HuK4nGig5G

In reality, what seems to be happening is that America is having dinner together at the same dinner plate and the location is the NFL. As a society we have skeletons in the closet and few people seem interested in these issues being addressed. Police brutality is still an issue. Innocent people are still being killed by law enforcement.