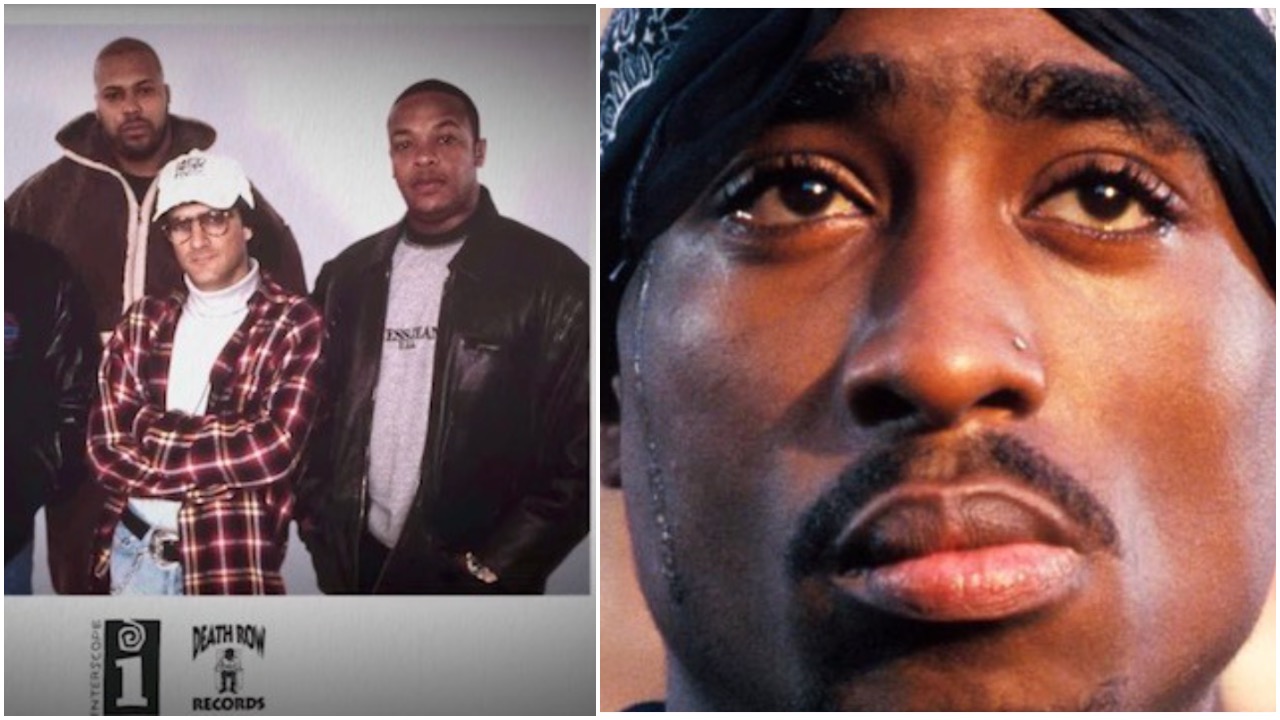 An audio recording has surfaced which was supposed to be featured on the ‘Murder Was The Case’ soundtrack which was released on 10/18/1994. The album is a West Coast classic. As you can tell from the audio up top (not the accompanying video) Dr. Dre was talking tough to the East Coast. Keep in mind, that Death Row (and now formerly Death Row) related artists have usually tried attributing the beef between Pac and Biggie as the root of the West Coast-East Coast beef.

The following video showcases Biggie Smalls and Tupac Shakur rappin together in Baltimore in 1993. Note: Tupac, then known as MC New York, lived in Baltimore from June 1984 – June 1988 before moving to the Bay Area in mid 1988. The point is that Big & Pac were breaking bread in ’93. If you listen to the video long enough you’ll hear Biggie scream “Thug Life.”

‘Thug Life’ the album was released on 9/26/1994. Before that, Pac released his debut studio album on 11/12/1991, ‘2Pacalypse Now’ and on 2/16/1993 he dropped his second studio album ‘Strictly 4 My N.I.G.G.A.Z…’ On 3/14/1995, Tupac dropped what many (not all) consider his best work, ‘Me Against the World.’ Anyone familiar with these projects knows well that Tupac, as an emcee, carried both a revolutionary zeal aimed at the government and “thug” element who loved his friends and took issue with the police.

Anyone familiar with the ’90s, regardless of location, knows very well the tone of the era. The 1990s was an era of the G-Code. East. West. Midwest. South. Didn’t make a difference. We’ll come back to Tupac shortly but first let’s return to Death Row records, the 1994 Source Award (which were NOT televised by The Source) and East Coast-West Coast animosity.

Check out the newspaper clipping below highlight the results of the 1st Annual “Source Awards” which took place on 4/25/1994. The event was held at the Paramount Theater in NYC but notice the amount of West Coast artists who took home awards (and rightfully so-the West Coast was running the Rap Game from 1990-94) even though the East was still producing classic albums. N.W.A’s ‘Straight Outta Compton’ dropped in 1988. Too Short’s ‘Short Dog In The House’ dropped in 1990. 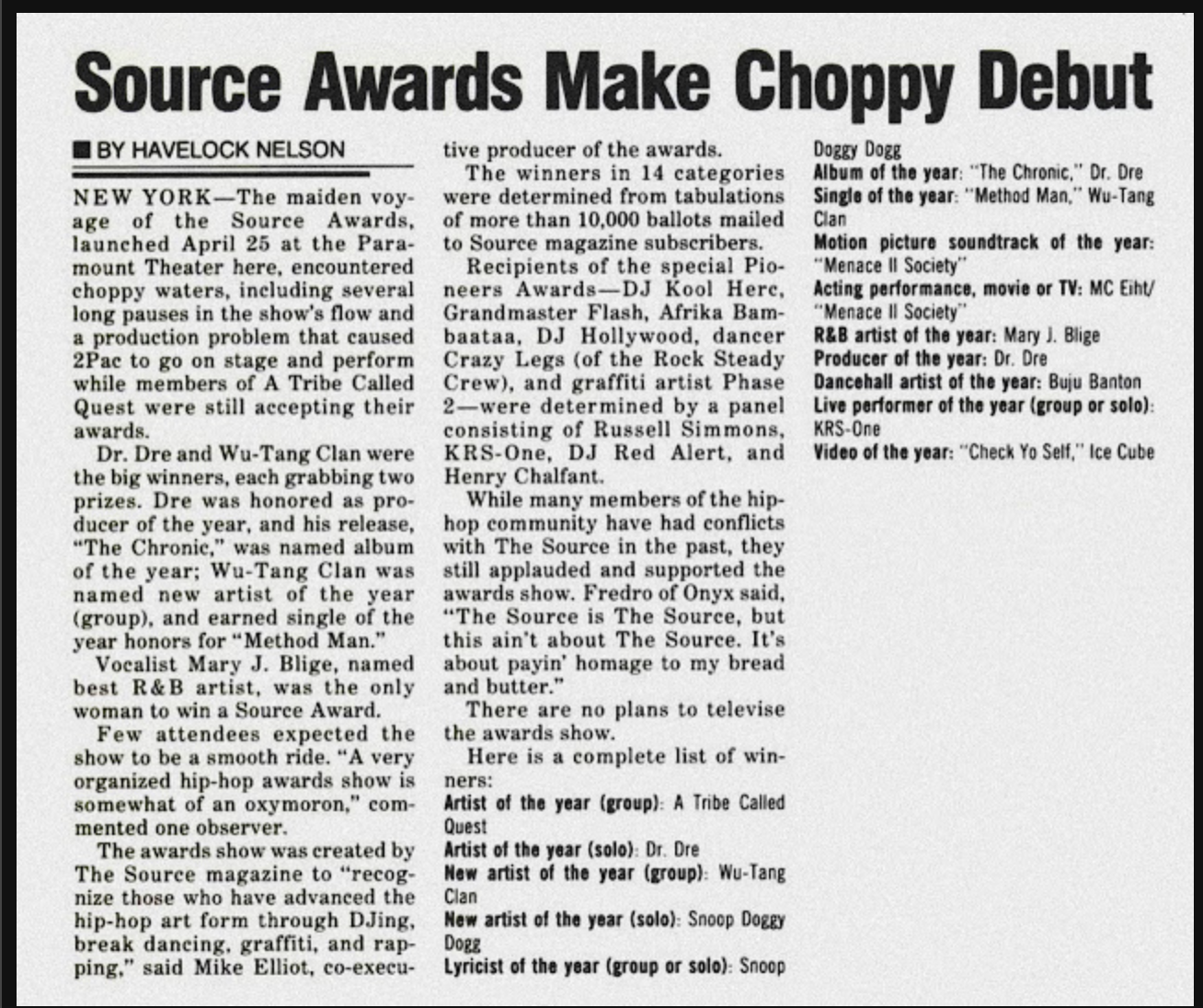 Notice a video clipping was recorded of Daz Dillinger acknowledging the animosity felt by West Coast artists at the 1994 Source Awards.

In October 1995 Tupac was released from Clinton Correctional Facility after a $1.4 million bail, which was put up by Death Row Records (Interscope’s Jimmy Iovine, who was in business w/ Death Row, later admitted on HBO’s series ‘The Defiant Ones’ to having a hand in Tupac signing to Death Row). On 2/13/1996 Pac dropped his last album while alive, ‘All Eyes On Me,’ by Death Row and Interscope Records. On 6/4/1996 Pac released his diss track, ‘Hit Em Up,’ which was namely aimed at Biggie and Puffy.

Tupac would eventually accuse Biggie and Puffy of having something to do with him getting shot at New York’s Quad Recording Studios on 11/30/1994 but Pac never mentioned anything about Biggie and Puff on the 1995 released ‘Me Against The World’ album.

In an old interview, Biggie and Puff can’t understand why Pac was accusing them of having anything to do with his Quad Recording Studios shooting.

On the track ‘Against All Odds’ from the ‘Makaveli: The Don Killuminati’ Tupac implicates Jimmy Henchman and Haitian Jack in his shooting at Quad Studios, rhyming,

“I heard he was light skinned, stocky with a Haitian accent/ Jewelery, fast cars and he’s known for flashing (What’s his name???)/ Listen while I take you back (NI**A SAY HIS NAME!) and lace this rap/ A real live tale about a snitch named Haitian Jack/ Knew he was workin for the feds, same crime, different trials/ N*gga, picture what he said, and did I mention/ Promised a payback, Jimmy Henchman, in due time/ I know you b*tch ni**as is listenin, The World Is Mine/ Set me up, wet me up, ni**as stuck me up/ Heard the guns bust but you tricks never shut me up”

Jimmy Henchman, who’s parents were from Haiti, eventually admitted to masterminding Tupac’s ambush at Quad Studios. Also, Henchmen’s one-time confidant Dexter Isaac, who’s doing life in prison, admitted that it was Tupac’s confidant, Stretch (who is now deceased), that set up Tupac at Quad Studios after being payed a quarter kilo of cocaine by Jimmy Henchmen to do so. From Pac’s lyrics on the track ‘Against All Odds’ it’s clear Pac knew that Henchmen was involved. In 2007, the United States deported Haitain Jack (legal name: Jacques Agnant) to Haiti however it seems like he’s back. Check out the photo below from December 2019 showcasing, from left to right, Haitan Jack, South Central LA’s Big U and Bimmy (Queens, NY-based lieutenant for former kingpin Supreme). 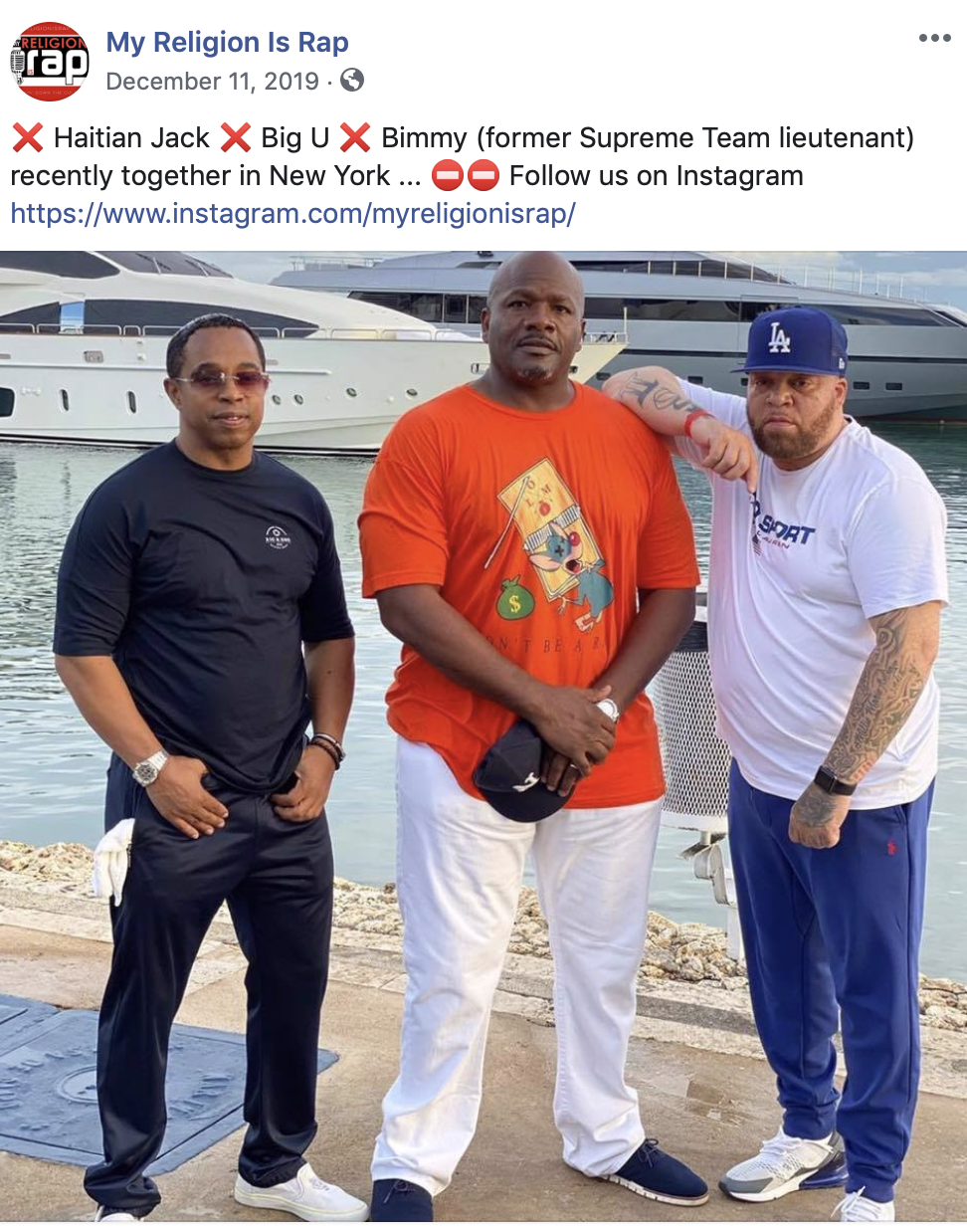 Recall, the title of this article asks the question, “Dr. Dre Exposed?” On the 1996 track, ‘Nas Is Coming,’ from Nas’ 2nd album, ‘It Was Written,’ Dr. Dre not only produced the track but also made an appearance engaging in dealing with Nas (the two would eventually go on to collaborate on The Firm’s album released 10/21/1997). Dre clowns the idea of East Coast-West Coast beef on the track when he states, “All these n*ggas out here talking this East Coast-West Coast bullsh*t; ni**as need to kill that sh*t and make some money, you know?”

However, as the following unreleased audio proves Dr. Dre was trying to instigate beef with the East Coast before Tupac was ever signed to Death Row Records (notice how Dre shouts out Thug Life, which was Pac Rap Crew before Death Row). Dr. Dre was a co-founder of Death Row Records. Also, as we previously stated, before Pac joined Death Row his style was more revolutionary and anti-police while rappin in ways that told the story of the ghettos occupied by Black people. The question becomes, did Death Row instigate Tupac to accuse Biggie Smalls and Puff Daddy of having him shot at Quad Studios? Biggie and the late Craig Mack both released their debut albums under Bad Boy Records in 1994 and were the first rappers to make an impact outside of the East Coast and on a national scale, especially Biggie which made him and Puff easy targets for a rap beef that would help sell records.

Also, Dre signed iconic lyricist Rakim to his Aftermath label in October 2000 but Rakim never dropped any project with the label. It was always a mystery as to why. Why didn’t arguably the best emcee of all-time drop a project with one of the best producers of all-time? 19 years after first signing with Aftermath and ZERO ALBUMS LATER Rakim finally admitted why-because Dr. Dre wanted to turn Rakim in a Gangster Rapper. Watch Rakim speak it from his own mouth below.

This follows a recently (re) surfaced 1996 diss track where Snoop disses Biggie before Pac ever signed to Death Row (which you can listen to here).

Tupac doesn’t seem responsible for the East Coast-West Coast beef. In retrospect, he just seems the most courageous.

Perhaps Dr. Dre, Jimmy Iovine and Suge Knight are the ones responsible for the Tupac-Biggie feud. Tupac was killed on 9/13/1996 in Las Vegas. Biggie was killed less than six months later in Los Angeles on 3/9/1997. Rest In Peace.