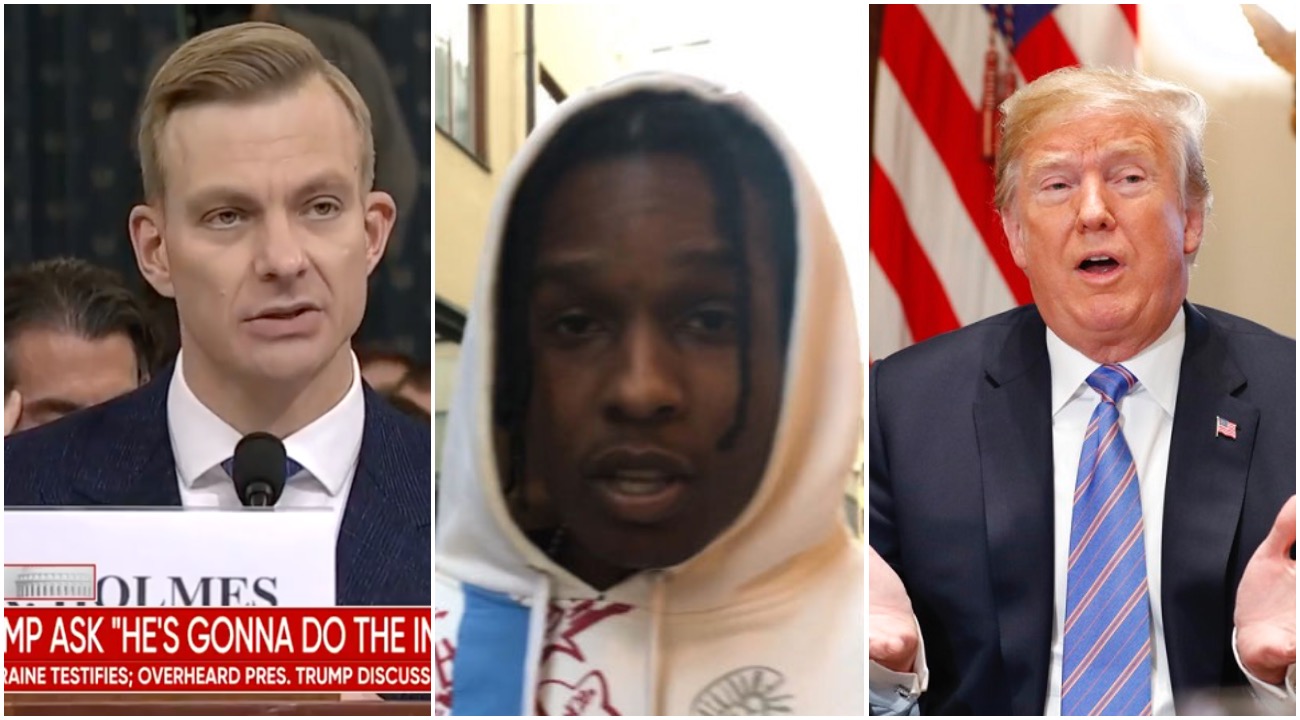 “Ambassador Sondland told the President that the rapper [A$AP Rocky] was ‘kind of eff’d [f*cked] there [Sweden]’ and should have pled guilty” before claiming that America’s EU ambassador stated how the Swedes should have released Rocky on the President’s “word.”

As the testimony continued, Holmes claims Ambassador Sondland suggested to President Trump that he should “play the racism card and then give the rapper a ‘ticker-tape’ [parade]” upon Rocky’s return to the United States.

Back on June 30 of this year, A$AP Rocky beefed with a pair of guys while walking through the streets of Stockholm, Sweden. The video of the ordeal went viral and Rocky would eventually get detained by Swedish authorities. While detained, President Trump made the following statement on the matter,

“I personally don’t know A$AP Rocky but I can tell you he has a lot of support from the African American community in this country…I can really say from everybody in this country because we are all one.”

Rocky was found guilty of assault on August 14 however he was already freed by the time the verdict was rendered and back in the United States.

A$AP Rocky released from prison and on his way home to the United States from Sweden. It was a Rocky Week, get home ASAP A$AP!

It seems like A$AP Rocky had knowledge of a possible political game being played at his expense and refused to acknowledge the President upon being freed,

“THANK YOU FROM THE BOTTOM OF MY HEART TO ALL OF MY FANS, FRIENDS AND ANYONE ACROSS THE GLOBE WHO SUPPORTED ME DURING THESE LAST FEW WEEKS I CANT BEGIN TO DESCRIBE HOW GRATEFUL I AM FOR ALL OF YOU THIS HAS BEEN A VERY DIFFICULT AND HUMBLING EXPERIENCE I WANT TO THANK THE COURT FOR ALLOWING ME BLADI AND THOTO TO RETURN TO OUR FAMILY AND FRIENDS THANKS AGAIN FOR ALL OF THE LOVE AND SUPPORT..”

Anyone interested can watch State Dept. official David Holmes testimony addressing the above-mentioned topic in the brief clip below.