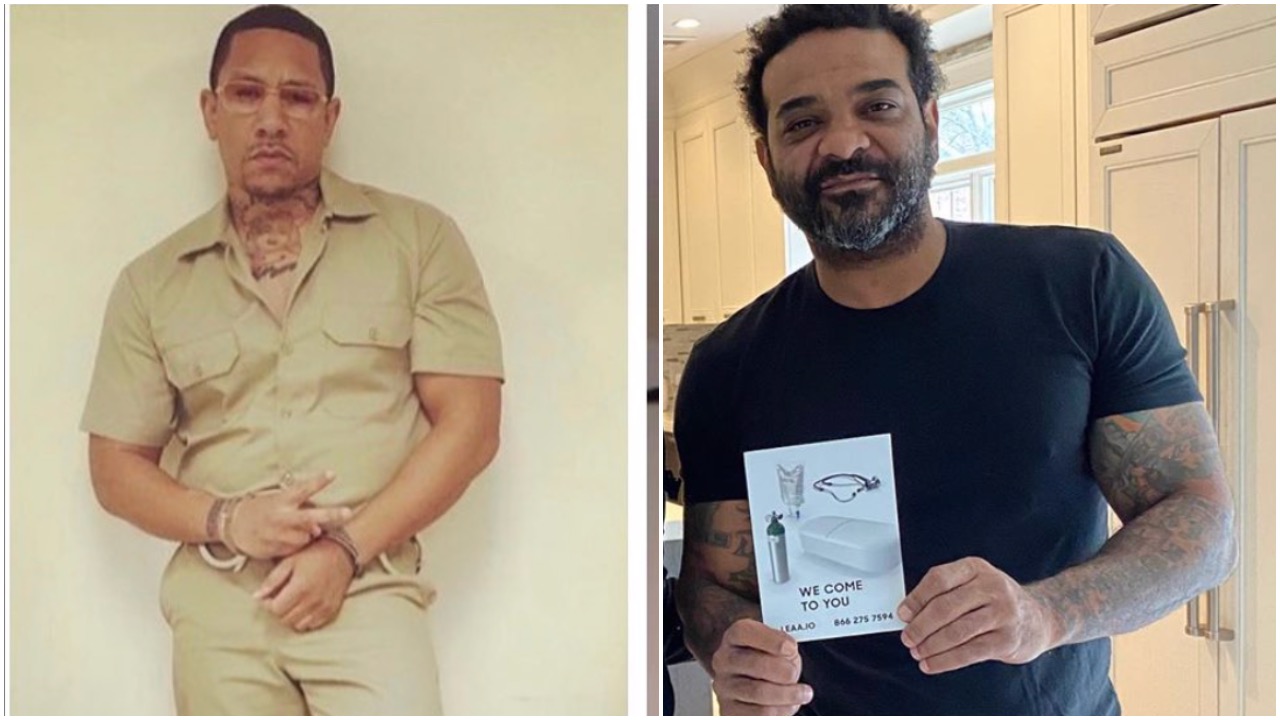 Many people outside of the East Coast might not be familiar with Snow Billy but his reputation on the streets of New York is solid. Snow Billy is a man who dedicates his time and energy these days to establishing himself in the business world as opposed to the underworld but a gangster will always be a gangster at heart, even if pursuing legal avenues for making a living. For the record, while not condoning Tekashi’s snitching, Snow Billy has always held the opinion that 6ix9ine was misguided. He claims to have introduced 6ix9ine to Nine Trey previously stated in an interview that he and Shotti beefed over who’d control 6ix9ine inside Tr3yWay in addition to claiming the FEDS instructed him that Shotti set him up to getting shot in the back of the head and neck.

Snow Billy is now taking aim at Jim Jones and in no uncertain terms is calling the veteran Harlem rapper a Federal agent while expelling himself in several posts.

“JIM JONES WAS CAUGHT ON THE WIRE WITH MEL, HE NEVER GOT CHARGED BECAUSE @jimjonescapo BEEN IN A COOPERATING AGREEMENT WITH THE FEDS FOR SEVERAL YEARS THERE IS NO PAPERWORK FOR THE PUBLIC ON THIS MATTER THE ONLY SIGN AGREEMENT IS WITH THE SOUTHERN DISTRICT OF NEW YORK” 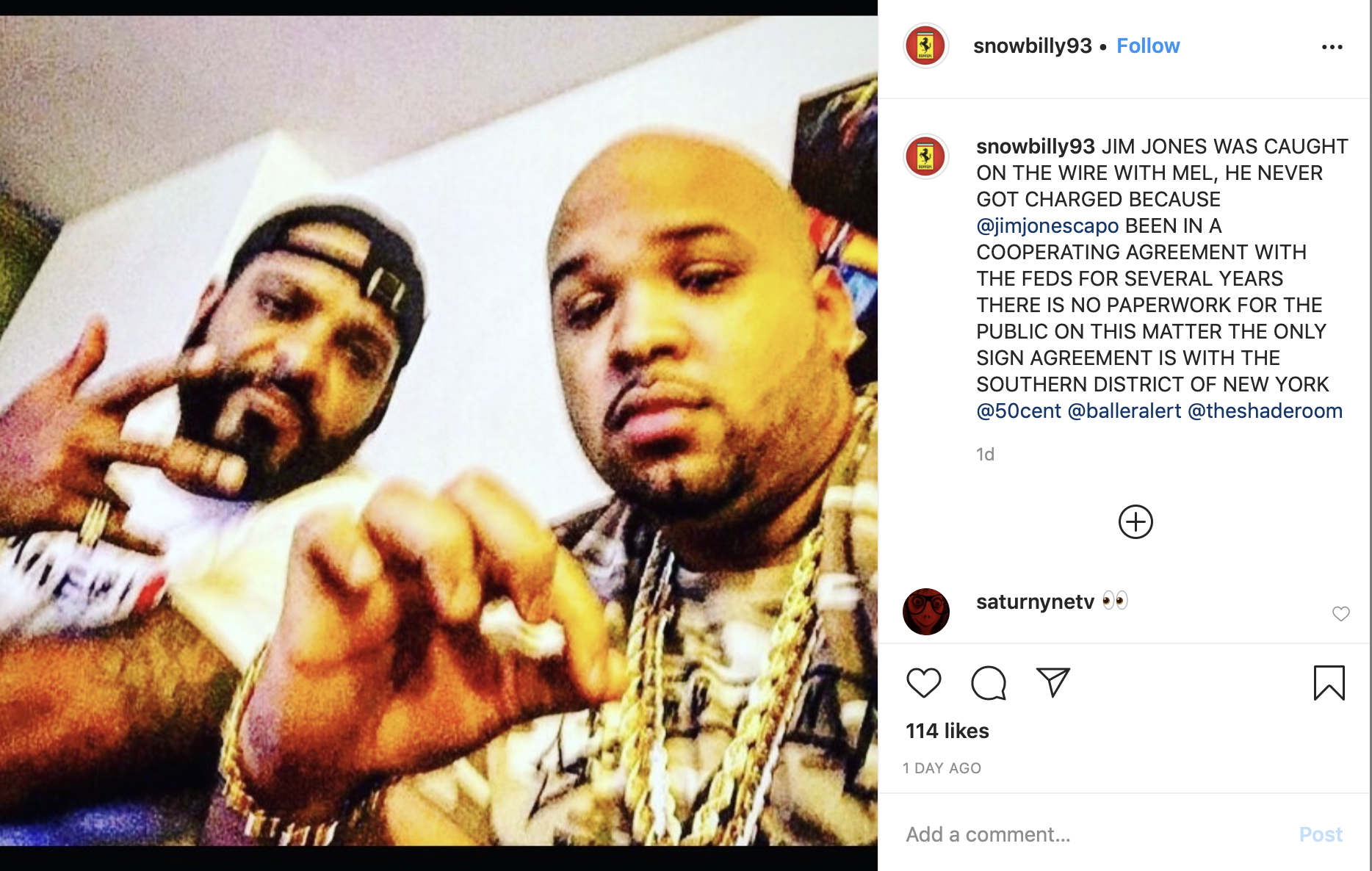 Interestingly, Snow Billy then moves on to suggest that Jim Jones has signed a Proffer Agreement with the U.S. Government and further claims that this explains why Jimmy has never been hit with a RICO (conspiracy) charge. Notice Billy tags 50 Cent in the post. This comes after 50 put up a post wondering how “individual 1” could get away from NOT being charged with RICO charges after being on the phone and discussing ‘”[super] violating” Tekashi…’ (see 50’s post here). Of course, court reporters reported that Jim Jones is the person who was on the phone stating just that.

“@50cent @theshaderoom @balleralert @jimjonescapo BEEN SIGN ON THE GOVERNMENT PROFFER AGREEMENT THAT WHY HE WAS NEVER CHARGED WITH THE RICO. #powerofthebadge🎖🎖🎖”

Judge Engelmayer: You had the wiretap up before, but then you started to hear what had been stirred up?
AUSA: Yes.

Snow Billy then addresses Maino, who, like Billy, is from Brooklyn. This apparently is because Maino liked a post from Jim Jones recently addressing Mel Murda (see here). 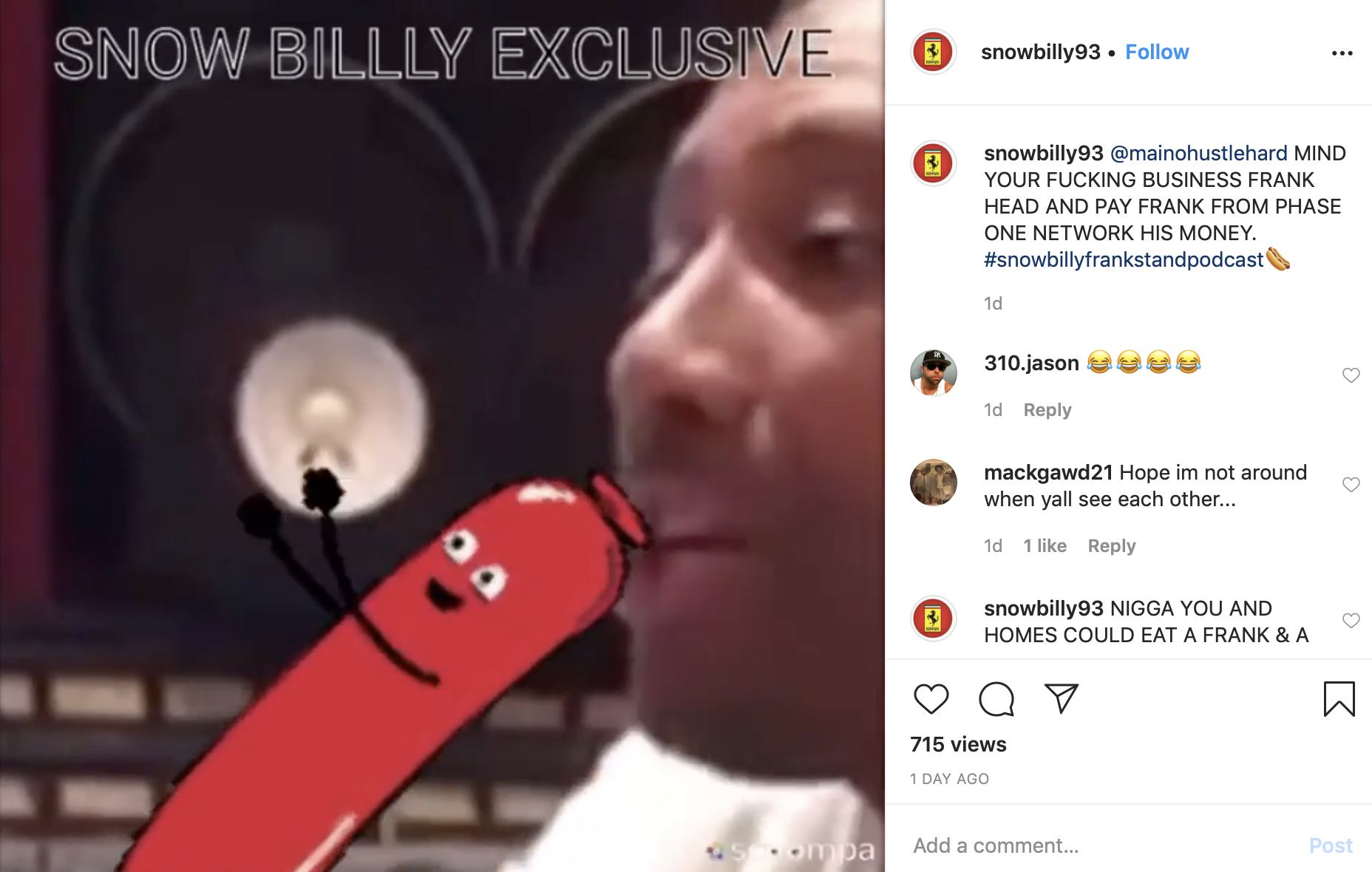 Snow Billy then continued to address Jim Jones. Notice the photo below, similar to the Maino post, with a hot dog in front of his mouth. Feel free to interpret that as you wish. Billy captioned the post by blunting telling Jim Jones while TAGGING him also.

But “YOUR BIG HOMIE MY LIL HOMIE…” Billy is telling Jim Jones that Mel Murda is your big homie but Billy’s lil homie. This refers to street rank. 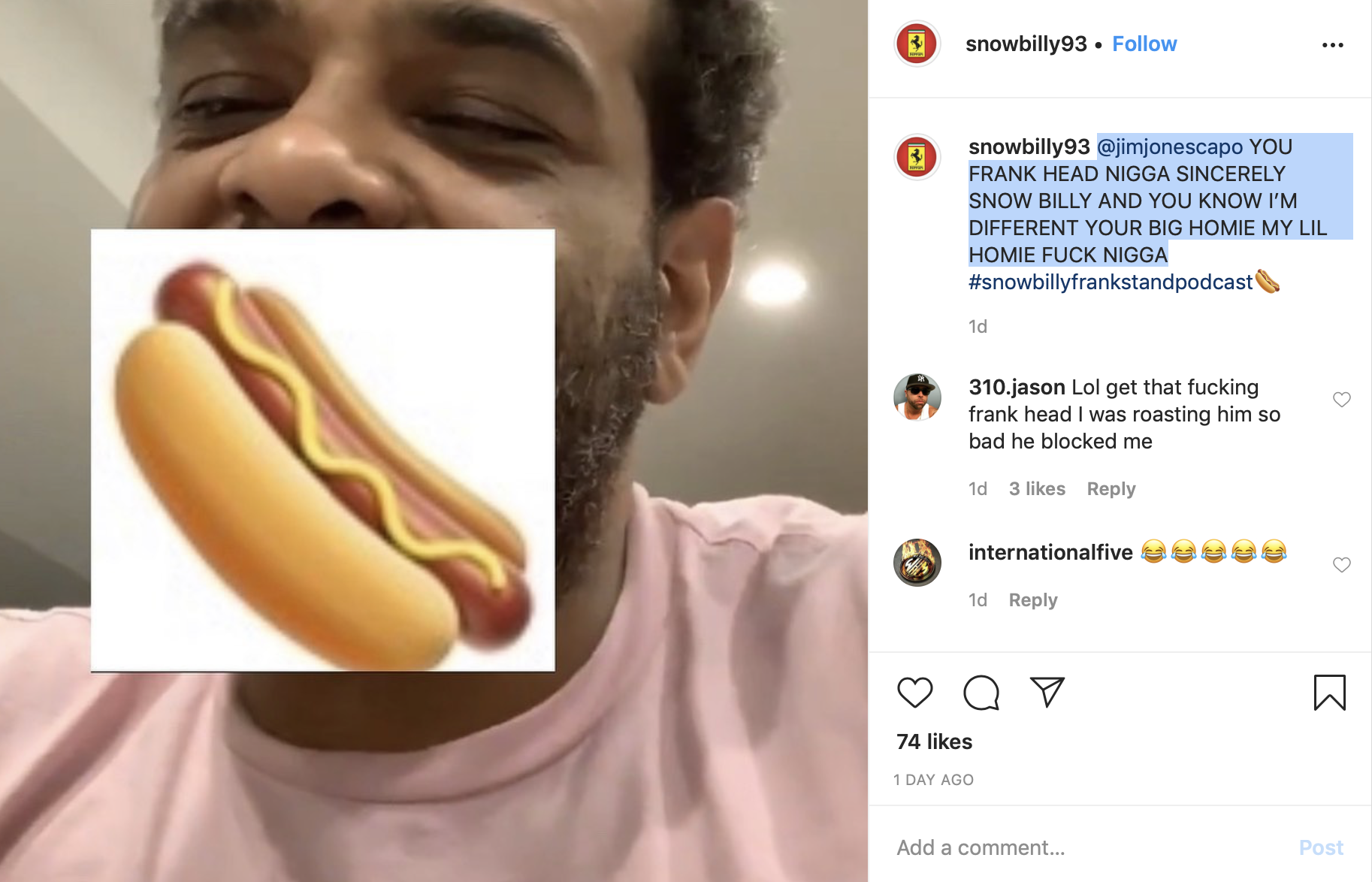 In the next post, Snow Billy continued to harshly criticize Jimmy,

“@jimjonescapo YOU THINK YOU KNOW MELLY?? NI**A YOU FORGOT I MADE THIS NI**A BLOOD ASK BEDSTUY, YOU LEFT THE HOMIE OUT TO DRY ON SO MANY LEVELS AFTER HE PUT HIS LIFE AND MY REPUTATION ON THE LINE FOR YOUR BUM ASS. REMEMBER WHEN HE HAD THAT STUPID ASS BMW? I MADE SURE THAT SH*T WAS PAID FOR SO THE REPO MAN WOULDN’T TAKE IT AND MELLY DIDN’T HAVE TO PARK THAT DINOSAUR IN THE GARAGE ON TROY AND ATLANTIC. I NEVER F*CK WIT YOU CAUSE MELLY SAID YOU WAS SCARED OF ME BACK THEN AND TRUTH BE TOLD BACK THEN YOU SHOULD OFF BEEN SCARED OF ME, YOU HAD THE RIGHT MIND SET @jimjonescapo IF YOU BUSINESS WAS STRAIGHT MELLY WOULDN’T HAD BEEN DOING DRUG DEALS WITH CI CEO KRIS BUT WE KNOW YOUR BUSINESS IS FUNNY THAT WHY YOUR WIFE OR WHO EVER SHE IS TO YOU LOST THAT HOUSE” 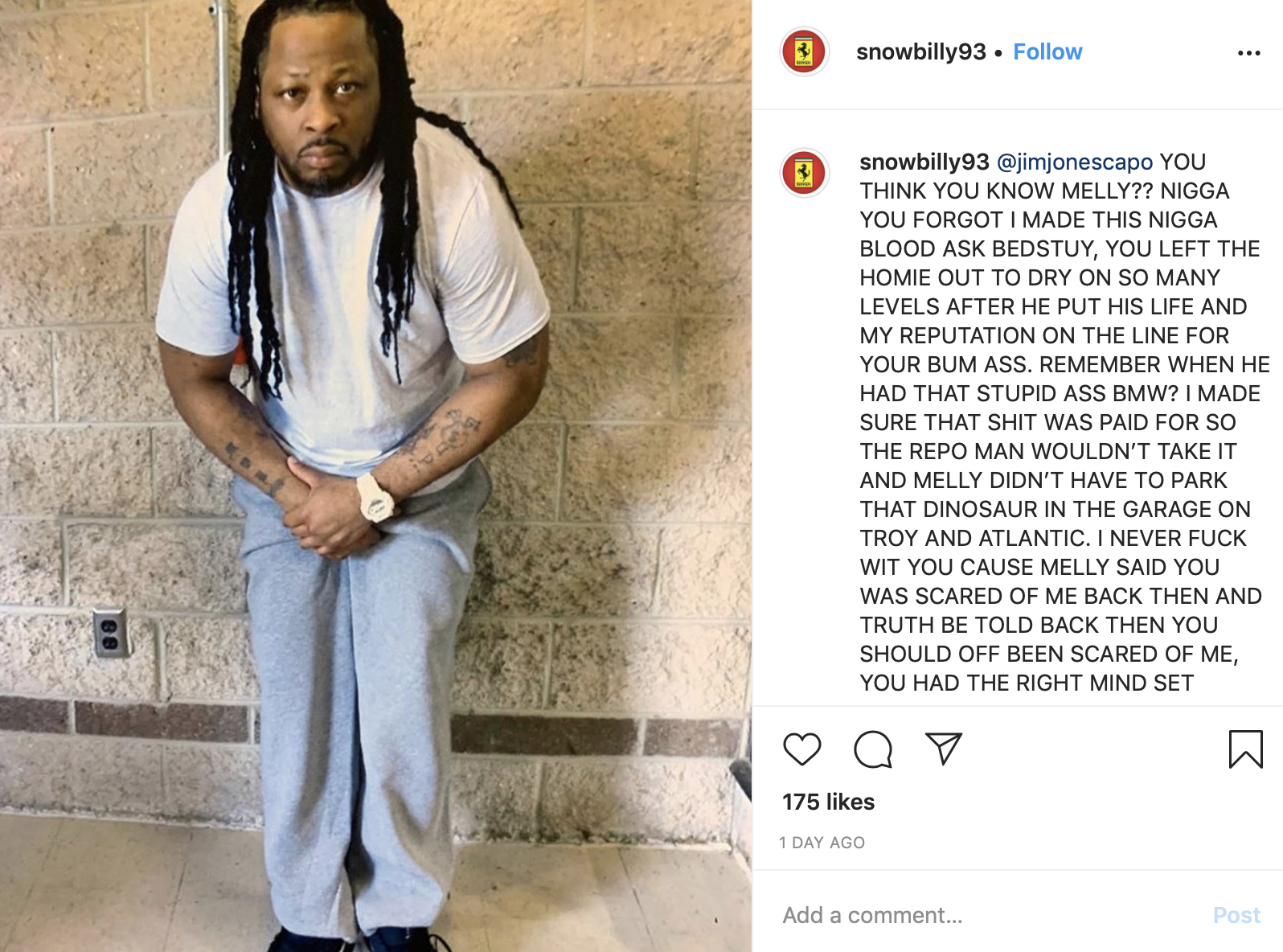 “@jimjonescapo YOU SEE MY POSITION NI**A, YOU SEE WHERE MELLY AT YOUR PROTECTION CAME FROM MY REPUTATION ASK NI**AS IN BEDSTUY IF THEY NOT D*CK RIDING YOU FOR YOUR CORNY ASS STYLE THEY WOULD TELL YOU MY REPUTATION THAT MELLY USED TO PROTECT YOUR FRANK HEAD ASS @jimjonescapo” 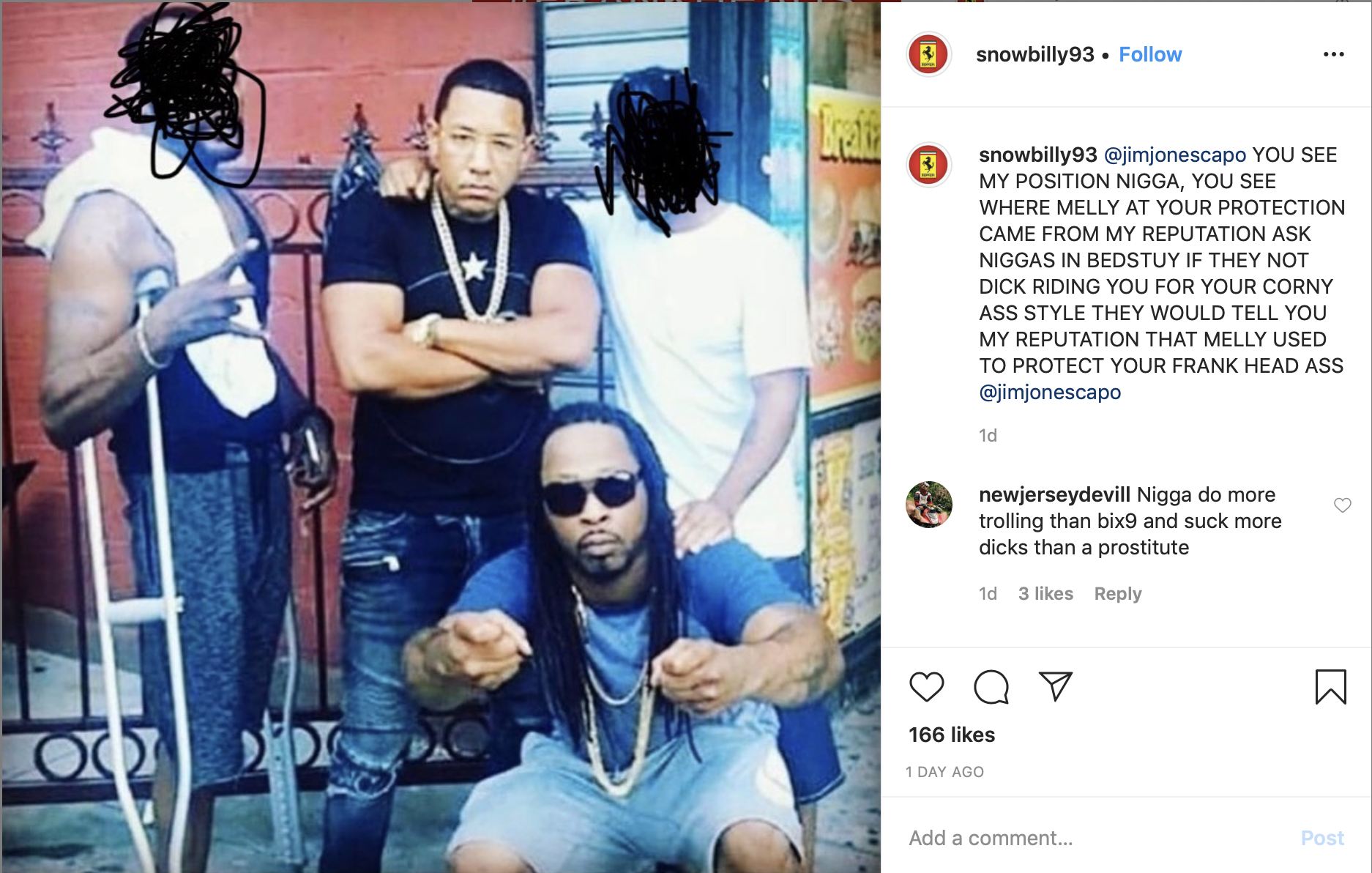 Snow Billy then posts a photo showing that Jim Jones blocked him on Instagram. 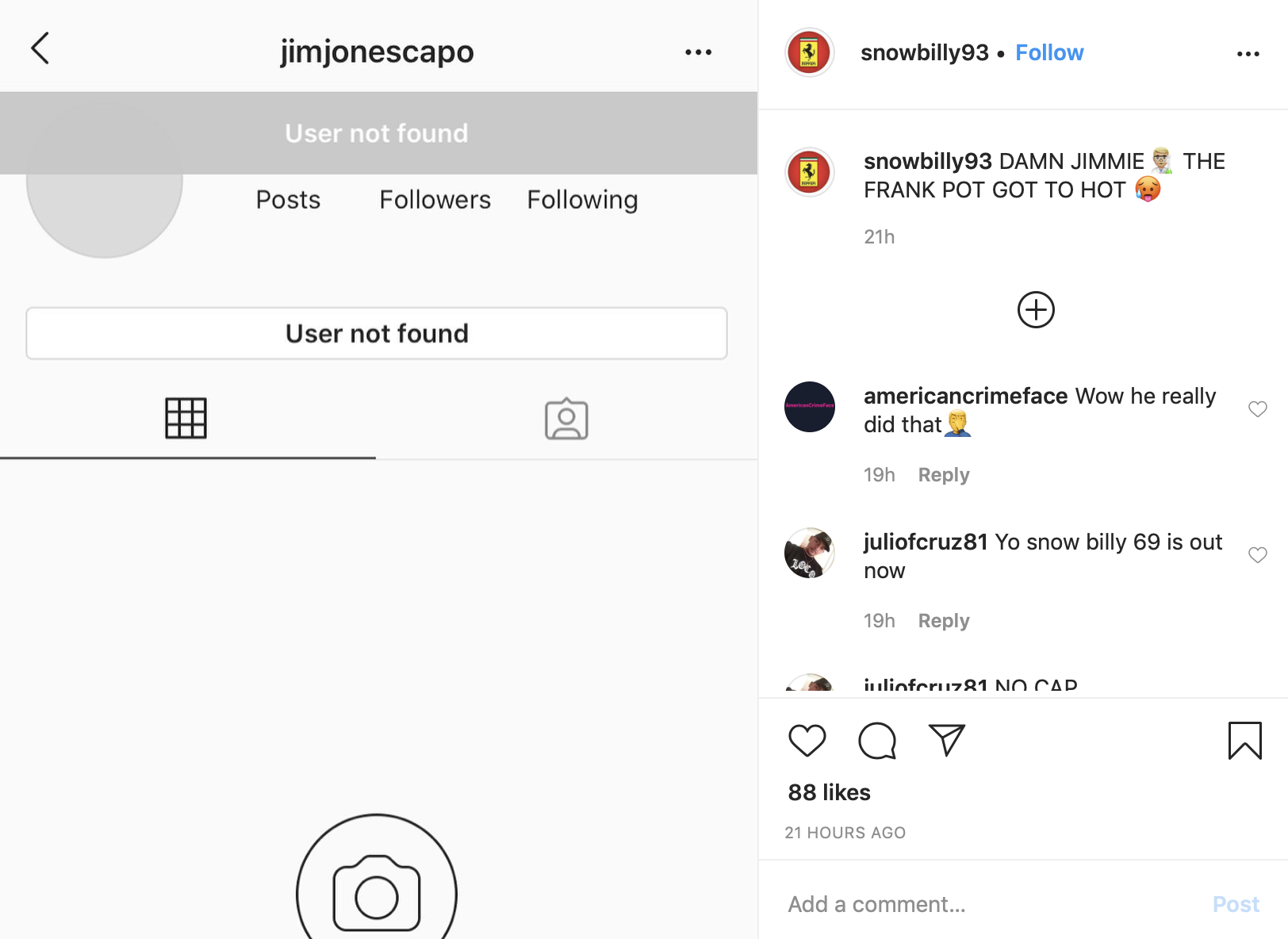